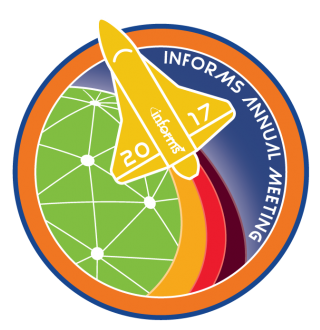 More Operations Research professors and students are building and deploying applications than they were two years ago, aligning them more with advanced analytics practitioners, according to our survey at the INFORMS Annual Meeting October 22-25 in Houston. The survey repeated with minor modifications our survey in 2015 at the same event, which found notable gaps between what students learn, what professors teach, and what practitioners need.

We can report the following:

In 2017 there were 90 total survey participants, all of whom were onsite at the INFORMS annual meeting. 39% were students; 37% were professors; and 24% practitioners. This demographic representation was very similar to the 2015 survey, though there were no repeat participants. The survey was designed to compare the responses of these three groups about solvers, programming languages, modeling languages, and software development. Participants were asked to answer based on their last two years of experience. For each question, participants could select multiple answers, and the graphs show the percent of respondents in that category who chose that answer.

What solvers are used in practice, in the classroom, and in research?

We had omitted the MATLAB solver in our 2015 survey—we had listed MATLAB only in the programming language section. When we added it in 2017, it proved to be the most popular solver, especially among students (80%) and professors (64%).

What modeling languages are used in practice, in the classroom, and in research? 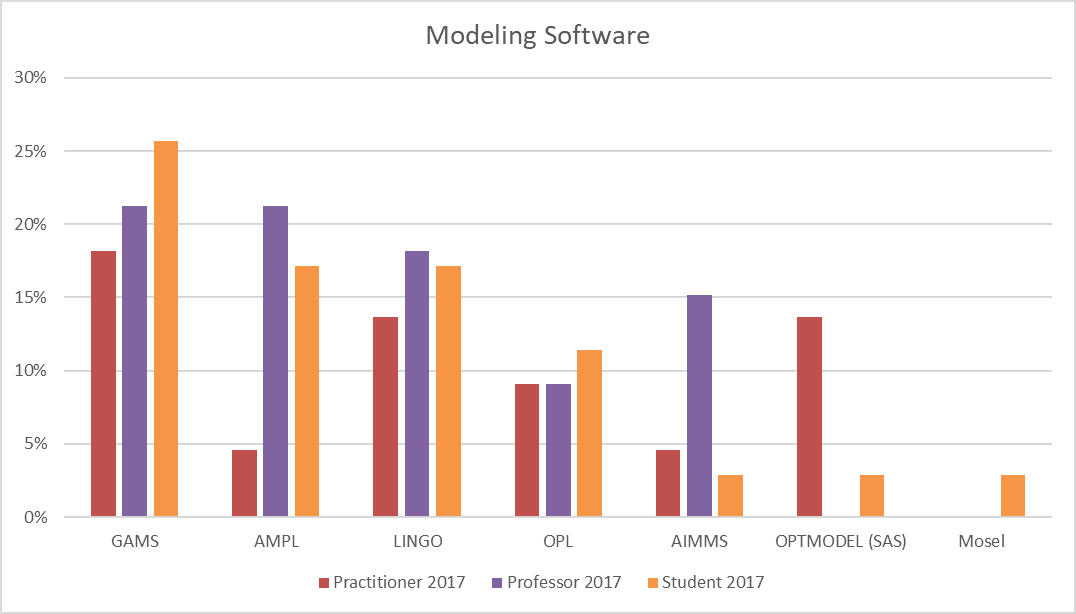 In 2015 and again in 2017, there was no dominant modeling software among the three demographic groups. In 2017, GAMS was used by 26% of students, the highest percentage of usage by one group.

What programming languages are used in practice, in the classroom, and in research? 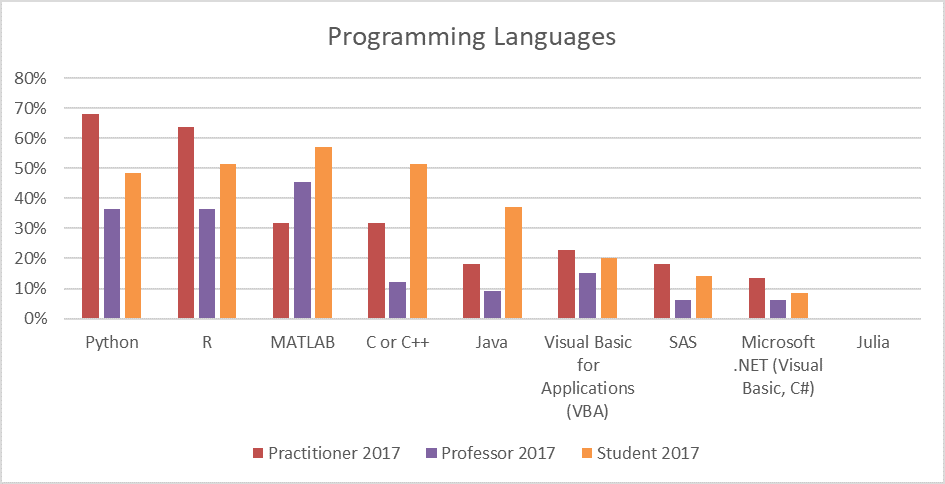 Python (68%) and R (64%) are very popular among practitioners, and nearly as popular in academia. Professors and students continue to use MATLAB more than do practitioners.

How are analytics embedded inside applications in practice, in the classroom, and in research?

In 2015, we noted that professors and students lagged practitioners in this area. In our 2017 survey, that gap has narrowed across different types of applications. Among students surveyed, 50% build applications in Excel, up from 4% of those surveyed in 2015. We recommend that students seeking jobs after graduating should continue building these valued application development skills.