Integer Programming and Beyond: An Interview with Ralph Gomory 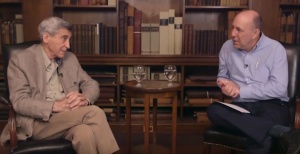 In May 2017, I had the pleasure and honor of interviewing Ralph Gomory for the INFORMS History & Traditions Committee project to create oral histories of luminaries in the field. The interview was conducted at The Century Association, a private club to which Dr. Gomory belongs. To those familiar with optimization, Gomory is known for starting integer programming with the creation of the Gomory cutting plane algorithm, and for the column generation methods known as the Gilmore-Gomory approach to cutting stock problems. However, most of Gomory’s career was spent outside of the optimization arena, and I attempted with the interview to create a thread among his many accomplishments.

After he obtained his PhD, he spent a short time at Princeton University, where he did his groundbreaking work on integer programming. Based on his training as a Naval officer, Gomory was then hired to lead a small group of mathematicians hired at IBM Research. The group included Benoit Mandelbrot, Paul Gilmore and T. C. Hu. A picture of them staring at a blackboard from 1961 can be found here. The work on cutting stock problems was motivated by an IBM customer, as discussed in the interview.

Gomory then went on to lead the entire math department at IBM Research, and a few years later was appointed the Director of IBM Research, leading a group of 1,200 researchers. He subsequently was President of the Sloan Foundation, where he helped to fund projects in a variety of scientific endeavors. He also wrote articles about the often-misunderstood relationships between science, technology, productivity, and a successful economy, which was influenced by his time at IBM. This led to research in economics and trade, where he then used his mathematical background to write books and papers in that area. After the Sloan Foundation, Gomory joined New York University as a Research Professor, where he has continued to do research in a variety of areas.

What was the common theme that I discovered? His life was always about solving challenging problems and thinking about solutions to those problems. In a similar manner, he viewed the challenges of solving integer programs, leading a 1,200-person organization at IBM, and understanding trade in economics. His personal homepage at http://www.ralphgomory.com/ shows the diversity of his intellectual interests. So, as an optimization person, while I first think of his pioneering work in integer programming, it’s clear that his influence in other areas is just as great.

The complete video interview, with a transcript, can be found at the INFORMS History & Traditions site.