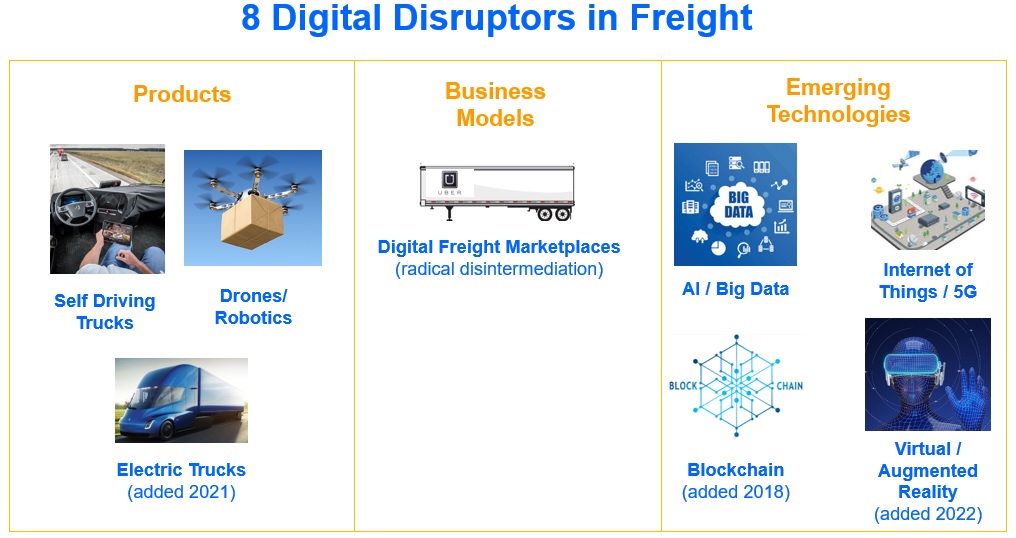 1. Products you can buy: self‑driving trucks, drones and robotics, and we added electric trucks, which we added last year.

2. Business models you can either adopt or utilize, which are essentially digital freight marketplaces. I used to refer to this category as “The Uberization of Trucking” until Uber itself got into the trucking business; now I call it “radical disintermediation.”

3. Emerging technologies that have potential for broad and a deep penetration. These are AI and Big Data, the Internet of Things and 5G, Blockchain, which we added in 2018, and Virtual and Augmented Reality, which we added this year.

For each of the eight disruptors, we asked executives to predict their potential impact on a one to four scale. Over the last seven years, we’ve arranged the disruptors in ascending order. 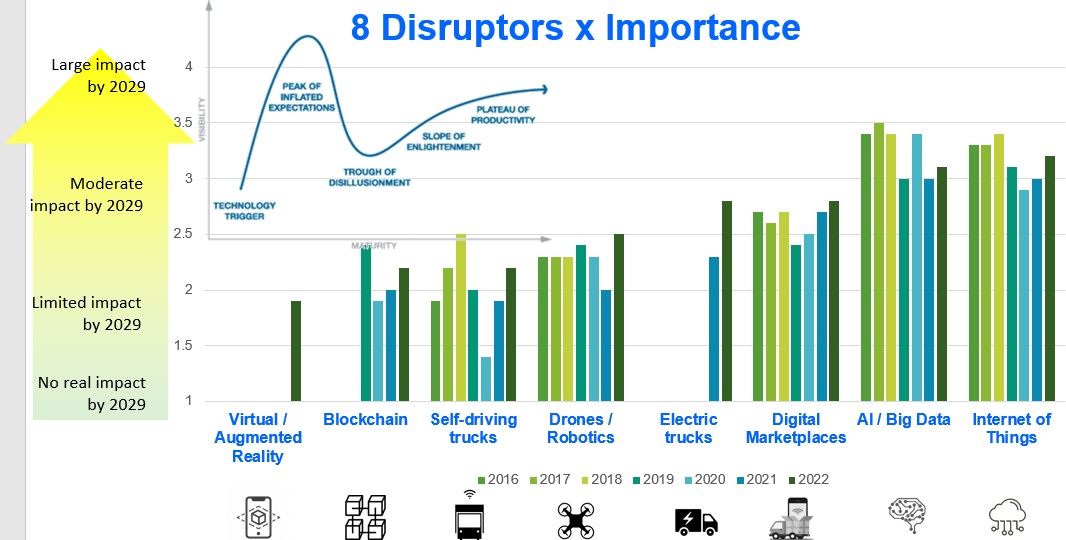 Note that average responses seem to have gone up, dipped down, and then started to come back up again for Blockchain, self‑driving trucks, drones and robotics, digital marketplaces, and the Internet of Things. I am reminded of the famous and wonderful Gartner Hype Cycle, which seemingly every significant new technology follows. At first everyone talks about the technology as a “big, big thing” and it peaks with inflated expectations; then it crashes into the trough of disillusionment; then slowly it recovers along the slope of enlightenment; and finally, it plateaus as everyone uses it and there is no longer competitive advantage, and everyone moves on to the next big thing. Arguably, you’re seeing some of that effect with these disruptors. Two of them, AI and Big Data, and the Internet of Things, have scored high consistently.

In the survey we presented nine different areas of impact—areas or initiatives that are common to most supply chain transportation companies—and asked executives to rank where the disruption would come on a one‑ to three‑point scale. Here are the results. I don’t see the same Gartner Hype Cycle, but note that for each impact area in 2021 executives were pretty skeptical. Possibly this was COVID‑related: perhaps as we were all hunkered down, executives said, “It’s about survival, it’s not about sexy new technology.” This year things have sparked up again. 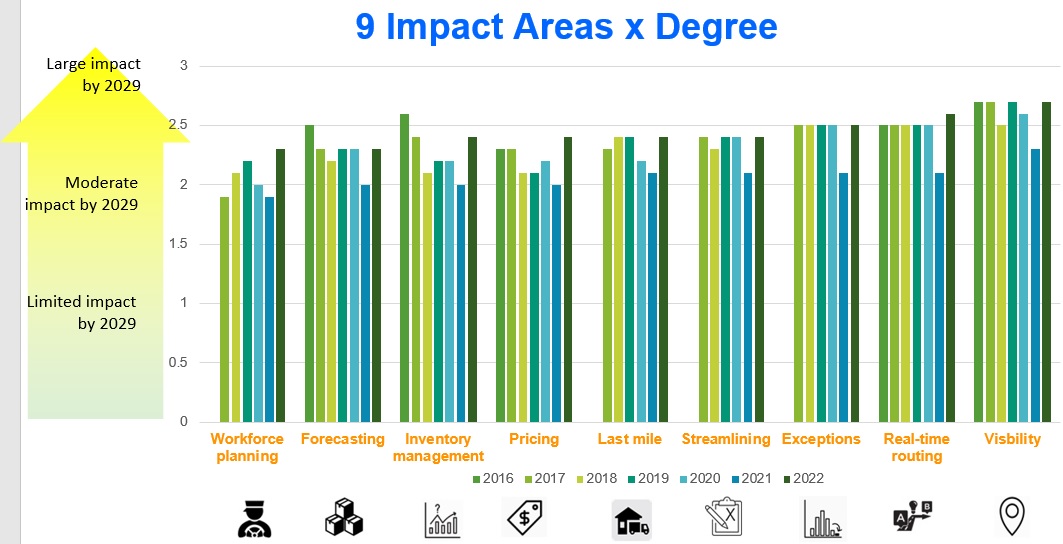 For whatever reason, the results over the years for Streamlining, Exception, and Real‑Time Routing have been almost weirdly consistent. Last year they took a dip, and now have reverted. Overall, these visualized averages say in effect where we can use the tech disruptors. Ask yourself where in your company do you think there might be some value and potential to disruption? You want to be the disruptor, not the disrupted, but where would you be playing catch up? Where could you get a little bit of an edge?

Finally, the survey presented a sanity check question about the reality and impact of digital disruption. Of the participants, 35 percent strongly agreed and are taking action, and 43 percent said they agree but they are unsure of how to proceed. That means 78% “buy” digital disruption. However, nine percent said that they don’t see disruption happening meaningfully in the next nine years. Also, 13 percent checked the survey’s “Other” box, and their write-in comments were skeptical. 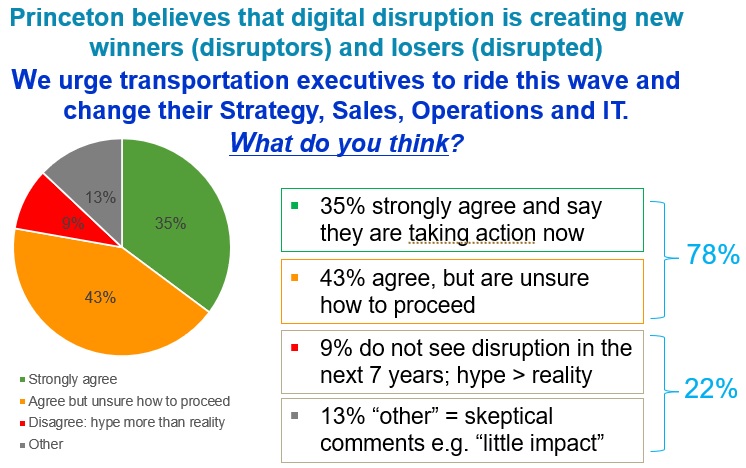 How might executives productively view and prioritize the disruptors? In this graph, the vertical axis is the competitive edge for companies that implement them. The horizontal axis indicates how hard they are to implement from a user’s perspective. We are assuming the technologies displayed are available—it’s pretty hard to implement something that is not available! 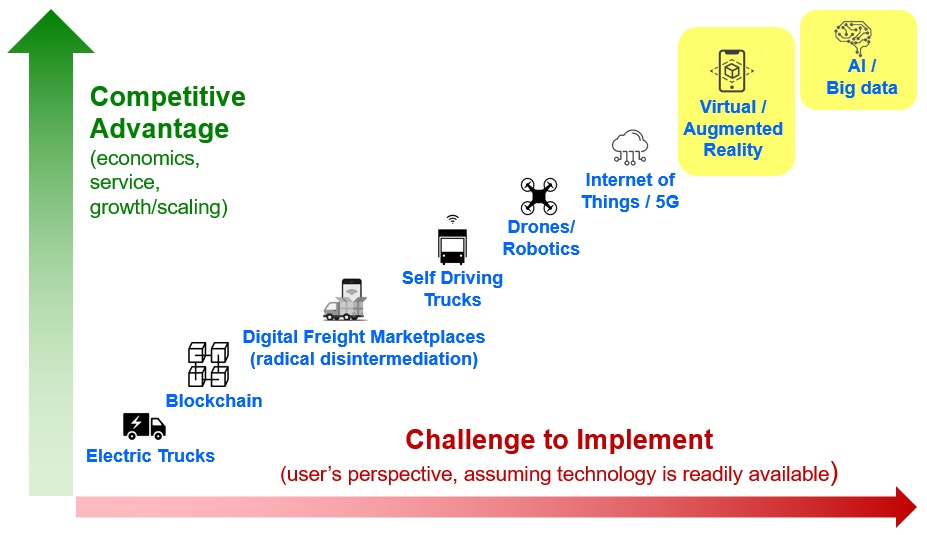 Electric trucks are relatively easy to implement because you buy them, though that purchase is not trivial. You decide what lanes to run them in, where you'll be able to repower them, etc. but they are relatively easy to implement. There is not a lot of competitive advantage to be gained with them because, in our opinion, they are built on the notion of wide adoption. They are not priced at a premium level; they are priced competitively with diesel trucks. If everyone’s got electric trucks, there is no competitive advantage for any company that has them. That said, electric trucks certainly make all the sense in the world for delivery.

I consider Blockchain easy to implement because your IT department will handle it or a product you use will. Blockchain only works when a lot of other people use it. It will have its day in the sun, I believe, but it won’t confer a big competitive advantage. Digital freight marketplaces are harder to implement because you essentially must displace existing carriers and brokers, but the competitive upside will potentially be more capacity and better prices.

Self‑driving trucks entail some implementation pains to convince customers, find appropriate lanes and manage maintenance. With drones or robotics, we need to find the right places that can afford them. Robots are not completely flexible; we need to change how we do operations, but they provide potentially lower costs and higher capacity. With IoT, the challenge to implement is to tag an entire class of “things” for it to matter. The competitive advantage is in visibility and inventory management, among other things.

Virtual and Augmented Reality is brand new—see this previous blog post for thoughts.

For AI and Big Data, the challenge in most cases is implementation is “a human in the loop.” The upsides are greatly improved economics, service, and growth. Scaling up with AI can be game‑changing. I think you will agree that the harder a technology is to implement, the greater the potential for significant competitive advantage. To my mind, that suggests a lot of the action is going to be with these disruptors.

To discuss this topic with Steve, email us to set up a call.