George Dantzig and Optimization under Uncertainty – A Potential Future for Analytics 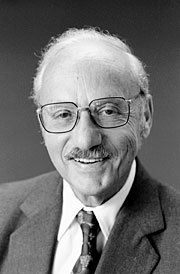 In 2001 I interviewed George Dantzig, the father of linear programming, as part of a project that ILOG was doing at the time to capture the reminiscences of the recipients of the Founders Award from the Mathematical Programming Society (see page 2 of Optima 65 for a picture).  Recently, the interviews were converted and transcribed for the Oral Histories project at INFORMS. You can view the complete video interview and transcript at the INFORMS webpage here.

I was privileged to have Dr. Dantzig as my PhD thesis advisor at Stanford. Among his many talents, he was especially astute at knowing which problem you should be trying to solve—an issue that continually faces us practitioners today. I’m often asked what it was like to be one of Dantzig’s PhD students. One of the main things I enjoyed about being supervised by him was his incredible intuition as to what should be the next focus area of my research. I would sit in his office, telling him about my latest ideas, and he consistently pointed me in the right direction. The problem that I was trying to solve back then was to discover a simplex method that would not favor the primal or dual formulations, leading me to analyze a variety of composite simplex algorithms. While I didn’t discover any new groundbreaking algorithm at the time, as an academic I later discovered what is now known as the primal-dual infeasible interior point method for linear programming. After giving a talk on that subject where George was present, he came up to me and said “Well, you’ve finally done it.  You found an algorithm that doesn’t have preference for the primal or dual formulation.” That was a pleasure to hear.

Professor Dantzig also understood that what was most important was to solve real problems that provided real benefits to businesses.  You can sense that by listening and reading the interview. During his entire career, he always wanted to find ways of solving optimization problems under uncertainty. Even today, I’m not convinced that we have figured out the right ways of acquiring the data, representing the problem, solving those representations, and then presenting solutions that are understandable to the end users. With the availability of large amounts of data, and the popularity of predictive analytics and data science, I’m hoping that someone in the research community will find a way of bringing the predictive and prescriptive sides of analytics together so as to address solving problems under uncertainty where the complete solution brings real understandable benefits. If that happens, then Dantzig’s ultimate goal will have been realized.