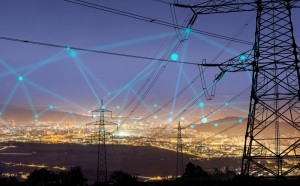 In the electric utility industry, an Independent System Operator (ISO) coordinates and directs the flow of electricity over a region’s high-voltage transmission system. Like an air traffic controller, an ISO oversees the daily operation of the power grid.

For several decades, mathematical optimization models have assisted critical decision-making about key assets that increase the efficiency of the existing power generation and distribution infrastructure. One ISO employs several optimization models to determine which generation units will be turned on during a 24-hour period, and to dispatch a given amount of power from those units to minimize the cost to the network and to meet business rules. A second set of models determines the optimal economic-dispatch schedule: the energy output levels of the power plants at a minimized production cost, deriving a schedule for power generation. The two sets of models are linked, with the results of the first model providing inputs and constraints in the second model.

The ISO had seen significant performance degradation in one phase of one of the optimization models, notably when the usage of Energy Storage Resources (ESRs) that can generate and conserve power—such as large rechargeable batteries—scaled beyond a trivial number. The leaders of the ISO sought better performance for both models, with an emphasis on the degradation in the pass from one to the other, and they set a target of modeling a realistic number of ESR units with no observable degradation.

The models had been built years earlier by an outside vendor and the original modelers had retired or moved on. A new team had built a prototype that successfully solved when including the desired number of ESRs, but only under very well-defined conditions that were not always realistic. The vendor’s current team lacked the mathematical optimization expertise to prevent and remediate the degrading performance of the model as the number of ESRs increased. The ISO leaders retained Princeton Consultants to conduct a model review because of our deep optimization expertise and familiarity with Gurobi, the solver powering the ISO’s models.

Our team followed its model review methodology to gain a deep understanding of the fundamental model, and to identify and evaluate various performance improvements.

In the initial investigation, we met with technical and business users to understand the purpose of the model and how it is used in the business process, including an in-depth review of the multi-pass model structure.

We then analyzed the existing code, implementing the outside vendor’s model, and evaluated the current run times for a suite of problems provided by the ISO to establish a performance baseline. This allowed us to understand how the model is formulated, how the multi-pass structure is run, and the differences between different models within the multi-pass structure. We used this knowledge to develop two documents to aid understanding of the models and for the ISO to have for future review:

We investigated methods which can be adjusted in the model that could improve performance. We identified several approaches for improvements: parameter tuning, constraint rewrites and refinements, and hybrid algorithmic approaches.

Our ideas for improvements were evaluated through tests against data sets and comparisons to baseline performance metrics. The validated results were formally published via weekly status updates and executive reports. We also worked with the Gurobi support team to identify issues limiting the performance of the solver on the models. As a result of these interactions, as well as proposed changes to Gurobi parameters, constraint refinements, and the hybrid approaches, we were able to improve performance by a factor of 6 on the hardest problems, reducing solution times to under a minute for the entire test set.

We identified significant performance improvements that can be made immediately by changing some of the Gurobi parameters used when running the model. There are multiple opportunities to improve long-term stability by updating the improvements to the formulation and code. Examples include modernizing the programming language used to develop and maintain models, and rewriting certain constraints for numerical stability.

Based on the model review, the ISO leaders are exploring short-term improvements that can be easily tested and implemented, and evaluating the recommended medium-term and long-term improvements.