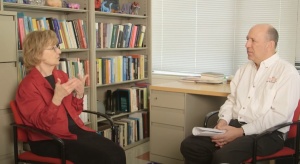 Margaret Wright is a distinguished researcher in optimization, linear algebra, and scientific computing, currently the Silver Professor of Computer Science at the Courant Institute of Mathematical Sciences, New York University. She is best known for groundbreaking work on barrier methods and nonlinearly constrained optimization, and on optimization without derivatives. In 2019 she was awarded the John von Neumann prize for her contributions to the numerical solution of optimization problems.

I have known Margaret since I was a graduate student in the mid 1980’s at Stanford when she was a research professor in the university’s Systems Optimization Laboratory. In August 2019, I interviewed her for the INFORMS Oral Histories program (video and full transcript are found here).

I recall attending the 1985 Mathematical Programming Symposium in Cambridge, Massachusetts. At that time, Narendra Karmarkar of AT&T Bell Labs was making fantastic claims about his algorithm for linear programming, claiming the simplex method was dead. He was a plenary speaker at the meeting along with Margaret; between them, there was a dramatic contrast in style, scholarship, and openness. Margaret spoke about her work with “The Gang of Four plus one”, namely Philip Gill, Michael Saunders, Walter Murray, and John Tomlin (the “plus one”), and discussed the results that proved that Karmarkar’s algorithm was similar to the barrier methods of Fiacco and McCormick. She also presented computational results indicating there was promise for the method in practice. That work later served as a foundation for my own research and results in creating the primal-dual infeasible interior point method for linear programming.

Margaret was one of the first computer science graduates from Stanford—and one of the first female computer science graduates anywhere. She later left Stanford and joined Bell Labs, and then became a professor at NYU. Margaret serves as a role model for women in the field, and has won numerous awards from different professional societies. Her interview reveals some of the challenges she has faced during her career, and it is inspiring to not just women, but men as well. It was an honor to spend that time interviewing her.