QuadGraphics, www.qg.com, an NYSE company, is the second largest print and integrated media solutions provider in North America. The firm’s leaders have consistently emphasized improving performance through innovation and, as evidence of that commitment, they invited us several years ago to look for optimization opportunities at their organization.

First, they showed us the printing presses, their most valuable asset. When our team looked at the presses, we literally could find nothing to help them with—mainly because all the jobs were designed to fit exactly on those presses, to not waste paper, to be efficient as possible.

However, we were happy to find was there was another area where we could help: the binding lines.

In printing different editions of magazines, QuadGraphics uses a binding line with multiple slots, or pockets, that are filled with different magazine parts needed for a particular run. The binding line can be programmed to pull material from different slots to assemble a specific edition or magazine at just the right moment in time to position it with other magazines headed for the same household. What really makes the process difficult to manage is the fact that often there are not enough pockets on the assembly machines to handle all the different magazine parts needed for complete production of an issue. From time to time, the machines must be halted to reload the pockets—an expensive procedure. To maximize productivity, the pockets need to be loaded in ways that minimize the number of times the machines must be stopped and the pockets reloaded. 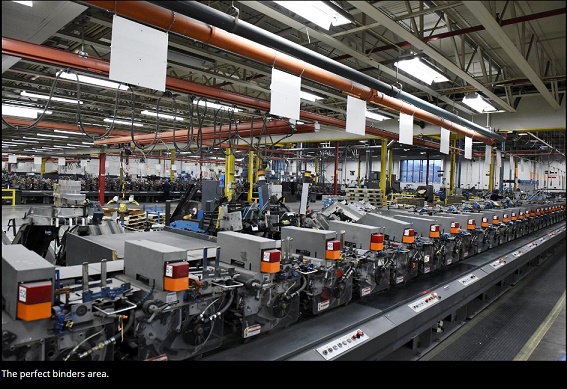 Each production center has a scheduler, or planner, whose primary job is to decide how the pockets should be filled and the runs scheduled each day to minimize press stoppages. With so many moving parts, it’s not an easy task. Before optimization, the scheduler would work with a spreadsheet-like matrix, in which the columns represented different press runs and the rows represented magazine components. A dot was placed in each column in the row of the components to be used in that run. A large number of dots next to each other in one row reflected good planning. This indicated that two or more concurrent runs would use the same component, thereby eliminating the need for changeovers. Scheduling involved repositioning rows and columns in ways that grouped dots together to minimize changeovers. Producing a solution was complicated and time consuming and tended to produce suboptimal solutions. Executives at QuadGraphics were not only concerned with the length of planning process and questionable solutions, they worried about having available only a limited number of people who understood the scheduling task. If one of them were to be hit by the proverbial truck, production would suffer.

Enter the optimization team. Because the scheduling challenge was so complex, the team decided that a symbiotic decision process, in which the schedulers and the optimizing software worked together interactively, would be best. The problem was sufficiently complex that no single algorithm or approach could provide an optimal solution in every scheduling situation. This led the team of optimizers to devise an “algorithm of algorithms,” which evaluated the situation and decided which of several other algorithms was most likely to produce the best solution, given the production constraints. Once the selected algorithm had been applied, it recommended a scheduling solution for the human scheduler to review and approve. If schedulers saw a problem, they could just adjust the constraints and rerun the optimization program to get a quick alternative.

The schedulers at QuadGraphics did not need much convincing that the software was capable of producing superior solutions. They could immediately see the run lengths and spaces on the planning grid created by the software were significantly longer than those provided by the human planners.

The reduction in machine stoppages and changeovers averaged approximately 10 percent, a significant savings when you think about a multibillion dollar business. The software increased QuadGraphics competitiveness in other ways as well. Planning time had been cut from hours to minutes. The improved efficiency increased printing capacity without additional capital investments. The improved bundling generated lower postal rates, which allowed QuadGraphics to increase the competitiveness of its bids for additional work.

Lastly, it is well worth noting that, because of the extraordinary savings achieved, the total time to payback for this optimization project was achieved in weeks, not months or years.

This post is partially excerpted from The Optimization Edge: Reinventing Decision Making to Maximize All Your Company's Assets (McGraw Hill) by Steve Sashihara, www.optimizationedge.com.